Of course #istandwithrussia and the majority of the Turkish people who are the REAL victims of NATO & Turkey’s politics /geopolitics:

[Full Video and Transcript of the Briefing by the Russian Ministry of Defence, 2 Dec. 2015]

Today, we will present to you only part of the available facts that prove there is a single team at work in the region, composed of extremists and the Turkish elites conspiring to steal oil from their neighbors. Oil is transported to Turkey in industrial quantities along the “rolling pipelines” made up of thousands of tanker trucks.

We are certain that Turkey is the destination for that stolen oil, and today we will present you with irrefutable facts to prove it.

We know how much Erdogan’s words are worth. He has already been caught red-handed by Turkish journalists, who have unearthed arms and munitions shipments from Turkey to the extremists, masked as humanitarian convoys. For that, those journalists have been jailed.

We know how much Erdogan’s words are worth. He has already been caught red-handed by Turkish journalists, who have unearthed arms and munitions shipments from Turkey to the extremists, masked as humanitarian convoys. For that, those journalists have been jailed.

Maybe, I would be too straightforward, but the control over this larcenous business can be trusted only to the closest people. It is interesting that no one in the West do not ask themselves a question, why the son of the Turkish President is the head of one of the largest energy companies and the son-in-law – the Minister of Energy and Natural Resources?

The Russian Defence Ministry will continue publishing materials concerning delivering oil products by terrorists to the foreign countries and informing about operations carried out by the Russian Aerospace Forces.

FULL SPEECH of the Chief of the Main Operational Directorate of the General Staff of the Russian Armed Forces Lt.Gen. Sergei Rudskoy

To terminate this source of funding, the Russian Aerospace Forces have been delivering airstrikes on oil extraction, storage, refining and transportation facilities in ISIS-controlled areas.


Over the past two months, Russian air strikes have inflicted damage on 32 oil production facilities, 11 refineries and 23 oil pumping stations. A total of 1,080 tanker trucks carrying oil and petroleum products have been destroyed.

This has enabled us to reduce the illegal oil turnover in Syria by almost 50 percent.

According to the most conservative estimates, the terrorist group’s revenues from its illegal oil operations have gone down from $3 million to $1.5 million a day. Multiply that figure by 4 years. After Russian strikes the terrorists’ income has decreased and constitutes 1,5 million dollars a day.

The General Staff of the Russian Federation Armed Forces has irrefutable evidence of Turkey’s involvement based on aerial and space reconnaissance data.

Today only a part of available information is to be presented.

We have identified three main oil transportation routes from ISIS-controlled Syrian and Iraqi territories into Turkey.

We will show you the entire chain of oil supplies into Turkey, from extraction to refining facilities.

Along the Western route, hydrocarbons produced from the oil fields near Al-Raqqah are transported to the north-west of Syria by motor vehicles.

The image made on November 13, 2015 shows the stretch of the highway near the town of Azaz linking Turkey and Syria where you can see a concentration of vehicles carrying petroleum products.

According to available data, a number of tanker trucks are disguised as simple heavy vehicles.

Similar map can be seen near Reyhanli

The video shows vehicles, which are freely crossing of the border. Here the Syrian territory is controlled by the Jabhat al-Nusra illegal armed grouping, which allow the oil tanker trucks and heavy vehicles with oil to enter the territory of Turkey. These vehicles are not checked at the Turkish side of the border. There are hundreds of such vehicles.

The image taken on November 16 shows up to 360 oil tanker trucks and heavy vehicles close to the Syrian border.

Up to 160 oil tanker trucks that just crossed the border are located in area “B”. In the direction of the checkpoint located in the area “A”, a convoy of 100 vehicles is heading to the Syrian border.

Space reconnaissance data confirmed that after crossing the border oil tank trucks and semi-trailers are heading to the ports of Dörtyol and Iskenderun, where special mooring places for tankers are equipped. There, one part of the oil is loaded into the vessels and is sent to oil proceeding facilities beyond the borders of Turkey. The other is sold on the domestic Turkish market. On average, one tanker is loaded with oil in these ports every day.

The space images of this ports dated November 25, 2015, show a concentration of petrol tank vehicles, which are waiting for shipment.

395 petrol tank vehicles were detected in Dörtyol, and 60 in Scanderoon.

The next route leads to Turkey from the oil fields located at the Euphrates right bank. The region near Deir ez-Zor is one of the largest oil extracting and oil refining centers that is currently under the ISIS control

A large number of oil refining facilities is located here, one of them can been seen at the screen.

In this region, a concentration of petrol tank vehicles awaiting shipment is constantly registered. Photos of automobile columns with little distance between each other are presented.

In the area of Deir-ez-Zor, space intelligence means detected 1722 oil transporting vehicles on October 18, 2015. Most vehicles were on the unequipped parking areas.

It is worth mentioning that the number of trucks at waiting areas, located in Deir-ez-Zor as well as in other Syrian regions has been significantly decreased since the beginning of the operation carried out by the Russian Aerospace Forces against the ISIS oil infrastructure.

There is no need to speak about ecology consequences of barbarian oil production.

Terrorists built oil lakes in the sand. One of them is located in Raqqah.

After being loaded with oil, columns of trucks are moving from the Eastern regions of Syria to Kamisli border town and waiting for their turn.

The presented photos, which were made this August, demonstrate hundreds of oil trucks and heavy vehicles moving both to and from the Turkish border.

Finally, the most part of oil is being transferred from the Eastern Syria to a large oil refinery plant in Batman (Turkey), which is located 100-kilometers far from the Syrian border.

The third oil transportation route to Turkey is laid from oil fields located in the North-East of Syria and North-Western areas of Iraq through Karachok and Cham Khanik Syrian towns and Zakho and Tatvan Iraqi ones.

The photos demonstrate concentration areas of trucks and heavy vehicles located near these towns.

On 28 November, 50 oil trucks were registered near Karachok on the territory of oil transferring point.

The photo demonstrates waiting areas of oil trucks located at the Syrian-Iraqi borderline near Cham Khanik. There were registered 380 vehicles in August. Everything has remained the same.

Reconnaissance is still registering movement of a large number of tanker vehicles crossing the Turkish and Iraqi borders. Even more tanker vehicles are registered on the Iraqi-Turkish border. Their amount has not decreased for the last three months.

They can’t fail to be noticed.

However, there not strikes on these columns from the coalition party. Only significant increase in the number of strategic UAVs is being observed.

Taking into consideration the fact that there are no strikes by the US-led coalition, the coordinates of active concentration areas with tanker trucks near certain inhabited areas will be published on the Russian Defence Ministry web-site after the briefing.

Then the trucks are crossing the borderline near Zakho with no restriction. Oil products are transported from Zakho to refinery plants. The nearest one is located in Batman. Oil products can be also transported to the large logistics center of the route, which is located close to the border between Iraq and Turkey, near Silopi.

The photo taken from the space on November 14 demonstrates presence of 3,220 oil trucks and vehicles. There is no need in further comments. The scale of the illegal business are truly impressive.

In total, in their illegal oil business, terrorists are using no less than 8,500 trucks transporting up to 200,000 tons of oil every day. Most of the vehicles are entering the Turkish territory from Iraq.

FULL SPEECH of the Chief of the Main Operational Directorate of Chief of National Centre for State Defence Control Lt.Gen. Mikhail Mizintsev
Convincing and irrevocable facts of a large-scale and harsh of theft energy resources from the sovereign state of Syria have been demonstrated today.

It is to be stressed that financial flows from the resale of oil products aim not only to enrich the leadership of Turkey; they are partially, but in large quantities, returned to the Syrian Arab Republic in terms of weapons, ammunition and mercenaries of different kind.

This week, ISIS and Jabhat al-Nusra has been reinforced with up to 2,000 militants, approximately 120 tons of munitions and 250 pieces of automobile hardware coming from Turkey.

According to the hard evidence gained in the course of intelligence, the Turkish party has been providing such activities regularly and for a long time. They do not even plan to stop doing it.

Certainly, next week we will inform you about delivery of weapons, ammunition, components of explosives, communication and other means by the Turkish party, training of terrorists in camps in the Turkish territory.

(RussiaToday Report, 2 Dec. 2015) ~ Turkey’s leadership, including President Erdogan and his family, is involved in illegal oil trade with Islamic State militants, says the Russian Defense Ministry, stressing that Turkey is the final destination for oil smuggled from Syria and Iraq.

The Russian Defense Ministry held a major briefing on new findings concerning IS funding in Moscow on Wednesday.

“Today, we are presenting only some of the facts that confirm that a whole team of bandits and Turkish elites stealing oil from their neighbors is operating in the region,” Antonov said, adding that this oil “in large quantities” enters the territory of Turkey via“live oil pipelines,” consisting of thousands of oil trucks.

Antonov added that Turkey is the main buyer of smuggled oil coming from Iraq and Syria.

“According to our data, the top political leadership of the country – President Erdogan and his family – is involved in this criminal business.”

However, since the start of Russia’s anti-terrorist operation in Syria on September 30, the income of Islamic State (IS, formerly ISIS) militants from illegal oil smuggling has been significantly reduced, the ministry said. 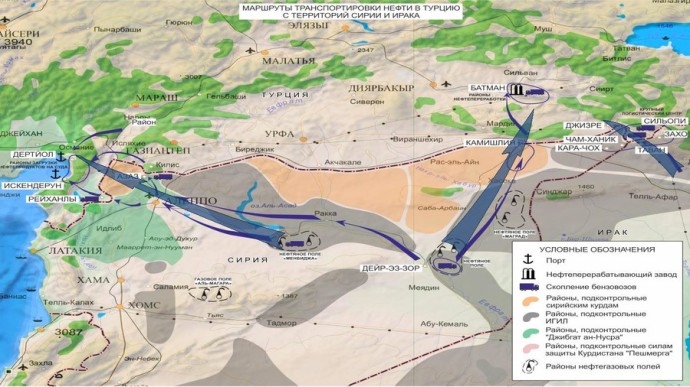 “The income of this terrorist organization was about $3 million per day. After two months of Russian airstrikes their income was about $1.5 million a day,” Lieutenant-General Sergey Rudskoy said.

At the briefing the ministry presented photos of oil trucks, videos of airstrikes on IS oil storage facilities and maps detailing the movement of smuggled oil. More evidence is to be published on the ministry’s website in the coming says, Rudskoy said.

The US-led coalition is not bombing IS oil trucks, Rudskoy said.

Ministry of Defence of the Russian Federation

Re-publications are welcome, but we kindly ask you, to facilitate the correct information’s diffusion, to cite all these original sources.

Islamic State of Iraq and the Levant in Libya

IS IT TIME FOR SWEDEN TO BE IN A PANIC ?

Project suspended: TSIPRAS: ‘TURKISH STREAM’ WILL HAVE ANOTHER NAME ON GREEK TERRITORY | EURACTIV

IS TURKEY COLLABORATING WITH THE ISLAMIC STATE (ISIS)?

DID TURKEY SHOOT DOWN THE RUSSIAN WARPLANE ON PURPOSE ?

Thank you for your contribution Cancel reply

The Question of Zion

The Question of Zion